Richie Coughlan is a native of the Republic of Ireland. He accepted a golf scholarship to Clemson University in 1993. He was an honorable mention All-American in both his sophomore and junior years while at Clemson. During his senior year, he won the Ping Intercollegiate after many runner-up finishes and was a First Team All American. In 1997 after graduating, he was a member of the Inaugural GB&I Palmer Cup Team and also a member of the GB&I Walker cup Team. In September of 1997, Coughlan turned professional and later that fall he became the first person in history to qualify for both the PGA Tour and the European Tours in the same season, at his first attempt.

In 1998, his rookie season Coughlan made 23 cuts and had 4 top 25-finishes which included a top 10 at the BC Open. Richie played three seasons on the PGA Tour and three Seasons on the Nationwide Tour (Korn Ferry Tour).

After leaving the professional ranks in 2005, Coughlan started his instruction career at Schenectady Municipal in Upstate New York. In 2007, he joined the PGA Tour Academies and became a Senior Certified Instructor and taught at the Weston Hills Academy, also The World Golf Village academy and the TPC Sawgrass Academy in Ponte Vedra beach, Florida….home of the PGA Tour. In January of 2010, he opened the PGA Tour Academy at TPC San Antonio and in 2011 he became the head teaching professional and Director of Instruction there. There, Richie worked extensively with top AJGA Juniors, College players at all divisional levels and touring professionals, Incl Cameron Beckman, Frank Conor and Mike McCullough.

In 2014 he was named PGA Tour Academies Instructor of the Year, and in 2017 he was inducted in Clemson’s Athletic Hall of Fame.

Richie has been teaching extensively since moving to Austin in September of 2017.

He is also a V. Assistant Coach with the top ranked University of Texas Men’s Golf Team.

As a professional, Hal played on the United States PGA Tour from 1969 to 1973. He tied for first in the Jacksonville Open and lost to Gary Player in a sudden death playoff. Hal qualified and made cut in the 1998 United States Senior Open at Olympia Fields and the Senior National PGA at PGA National and was inducted into the Texas Golf Hall of Fame.

Hal enjoys teaching the game and has taught more than 1,000 male and female golfers in 11 different countries. He takes pride in his students' careers and has helped more than 30 of them reach their goals and play on a professional golf tour. In 2005, Hal was nominated as the South Texas Teacher of the Year.

You can take advantage of Hal Underwood's expertise at The Driving Range Round Rock . He is known for his great tales and cool conversations. Hal is available for private and group lessons. 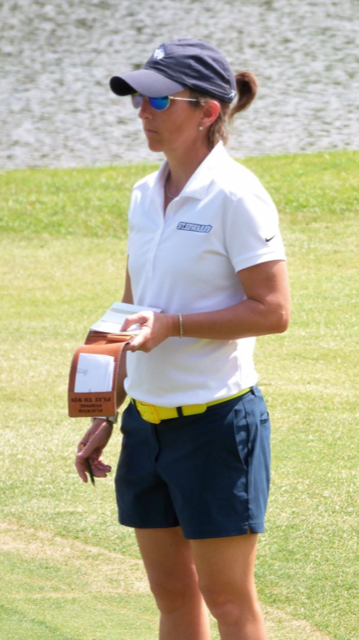 Jennifer grew up in Austin and attended Anderson High School. After receiving her bachelor’s degree in Exercise and Sports Science from Mary Hardin-Baylor, she attended Baylor University and earned a master’s degree in Sports Management. After graduate school she became an assistant golf professional at Mill Creek Inn and Golf Club. Most recently, she has spent the last 17 years coaching at St. Edward’s University as the Director of Golf, Head Women’s Golf Coach.

As a player, Jennifer earned four NAIA all-America honors as a player at Mary Hardin-Baylor. She was named four-time most valuable player, was selected senior athlete of the year and was a member of the 2000 NAIA National Championship Team.

He has taught golf, and other course works at UT Austin, Seoul National University, and the Korea Military Academy for over 15 years. He is a member of the World Golf Teachers Federation as a Master Golf Professional and an examiner.